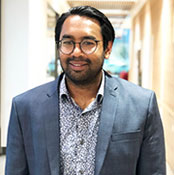 Mithra obtained his MBBS at the University of Melbourne in 2007 and obtained his FRACS in General Surgery in 2015. He then spent the next four years in post fellowship training in HPB and Liver Transplant with fellowships in Monash, Singapore and Royal Brisbane Hospital, having just finished as a Liver Transplant surgeon at the Austin Hospital. Whilst in Brisbane, Mithra was trained in complex laproscopic and robotic liver and pancreas operations. Mithra is the only ANZHPBA Exam Accredited Fellow in the South East of Melbourne.

His private practice is in Berwick and also in Mt Waverly. He has public appointments at the Northern Hospital and at Monash Health too. Mithra has extensive experience in complex liver and pancreatic disease. He has published extensively as well in complex bilary disease. He also manages complex Upper GI problems as well in particular reflux and hiatal hernias. Mithra will also see all General Surgical problems as well and provides comprehensive care for all his patients.