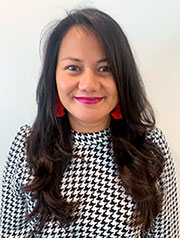 Dr Sherry Salter is a Consultant Renal and Pancreas Transplant and General Surgeon. Sherry is a New Zealand-born Samoan now living in Melbourne with her husband and two very active young sons. Sherry is the only female General Surgeon of Pacific Island heritage consulting in Australia and is fluent in Samoan. As well as performing surgery, she mentors surgical trainees and publishes articles relating to her work. In balancing her life, Sherry enjoys spending time with her family as well as travel, dining out and watching sport.

Sherry studied medicine at The University of Otago, New Zealand, graduating in 2003. She subsequently trained in General Surgery and became a Fellow of the Royal Australasian College of Surgeons in 2013. Sherry followed this with two years of post-fellowship training at Westmead Hospital, Sydney and Monash Medical Centre, Melbourne and was awarded a Fellowship in Renal and Pancreas Transplantation Surgery. She also completed a Fellowship in Trauma at the Auckland City Hospital, New Zealand. Sherry has worked in a number of both urban and rural settings throughout her career. She currently has a public hospital appointment at Monash Health as well as private hospital appointments at St John of God Hospital, Berwick and Jessie McPherson Private Hospital, Clayton.

Dr Sherry Salter accepts a range of referrals, including surgery for: